Following the conclusion of a hugely successful Intra-Regional Competition that was played over the first two weeks of June, USA Cricket is pleased to announce the four 14-player Regional teams, representing East, Central, Southwest, and West Regions.

The USA Cricket Women’s Selection Panel has chosen these 56 players based upon their attitude, fitness, skill, and performance, and they will now go on to represent their Regional Teams and compete for a place at the National Championship.

Where there are exceptional circumstances, players who didn’t play in the Regional Series may still be considered for selection in either the Women’s or Women’s U19 Nationals. Further, all U19 players who played in the Intra-Regional Competition will also be considered for selection in the Women’s U19 Nationals irrespective of whether they have been selected today in any of the teams participating in the Regional Series. USA Cricket Interim Chair of Women & Girls’ Selectors, Ritesh Kadu commented, “The turf wickets and facilities at Church Street, Morrisville, North Carolina, and the Prairie View Cricket Complex in Texas will provide superb settings for the selectors to see our best players perform in what will no doubt be an extremely competitive Regional Series.

We have a wonderful mix of seasoned players, and a number of talented youngsters coming up through the program, and we are looking forward to finding the best players for the USA Women’s Coach, Julia Price, to work with leading into the ICC Americas Women’s T20 Qualifier currently scheduled for early September, and the ICC Women’s Cricket World Cup Qualifiers in early December.” 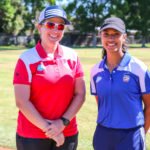 To see photos from a selection of matches at the Intra-Regionals please click here.

The full new Pathway for Women and Girls can be found below.